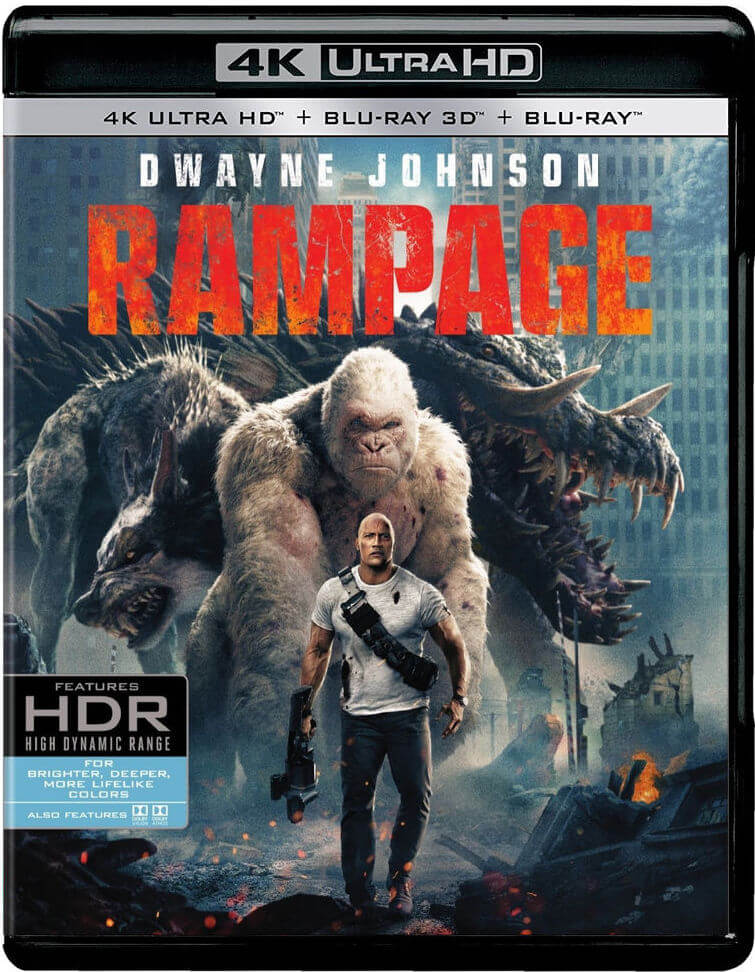 “Primatologist Davis (Dwayne Johnson) shares an unshakable bond with George, the extraordinarily intelligent silverback gorilla who has been in his care since he was young. When a greed-fueled corporation’s genetic experiment goes awry, George and other animals across the country are mutated into aggressive supercreatures who destroy everything in their path. In this adrenaline-filled ride, Davis tries to find an antidote, not only to halt a global catastrophe but also to save the fearsome creature who was once his friend.”

The Rock is the worlds biggest star right now and it seems like everything he touches turns out to gold… well that magic is starting to slightly vanish as he has used it to much and to quickly I think. It seems like he is spitting out new movies every year… and I really hope he is careful there as I like that man so much!
Rampage is an entertaining movie for sure, it’s a CGI orgie movie with some heavy special effects, and that’s almost about it. Rampage doesn’t manage to deliver much more than that, its story is very basic… it goes from point A to point B.
The characters aren’t interesting at all and the acting is average.
And this is where I think The Rock better be careful, we all know how awesome he is in real life, and I don’t know anyone who hates him… and every movie he does goes well… but at some point to audience is gonna have enough of that and I really don’t want that to happen! He better give some time with his projects and go in 100% at each and everyone of them… I know everyone wants to work with him but in the long turn it may be bad for him.
Rmapage is another one of his “ok” movies… better than Jumanji and Baywatch in any case, but still not a huge improvement. And I heard that his latest movie isn’t that good either… so please The Rock, threat your projects with carefulness and give them some more time.
But as I said in the beginning, still a very entertaining movie to watch, but I do expect more from The Rock by now.

The 4k version is a joy to watch yet again, it has a lot of CGI (special effects) and you enjoy every moment of the huge monsters when they are in the screen.
Great colors and contrast and a very sharp picture to.